How Alex Craig Landed $72,000 in 4 Months Selling Potatoes on the Internet

What do most entrepreneurs sell?

But Alex Craig had his own set of ideas. 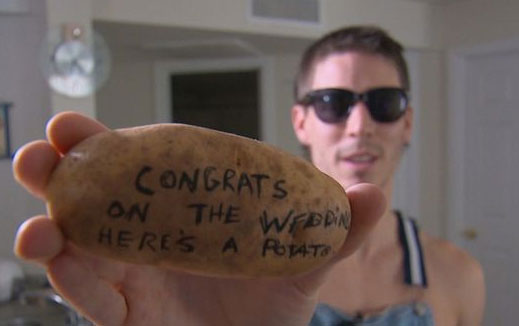 Back in 2015, the 24 year-old app developer made a lot of money selling potatoes online.

Alex started Potato Parcel, a business built on the idea that people would want to send potatoes with messages on them. To quote the website’s motto, “The best alternative to a greeting card or flowers. Mail a Potato”.

As Alex put it, “made tens of thousands of dollars and at the same time, touched countless lives”.

Now, how did he get such craziness of the drawing board in the first place?

Read to find out.

How the potato business was born

He stumbled upon it.

It all started back in May 2015, Alex saw a post on Reddit from a mailman showing a single potato with a stamp on it: 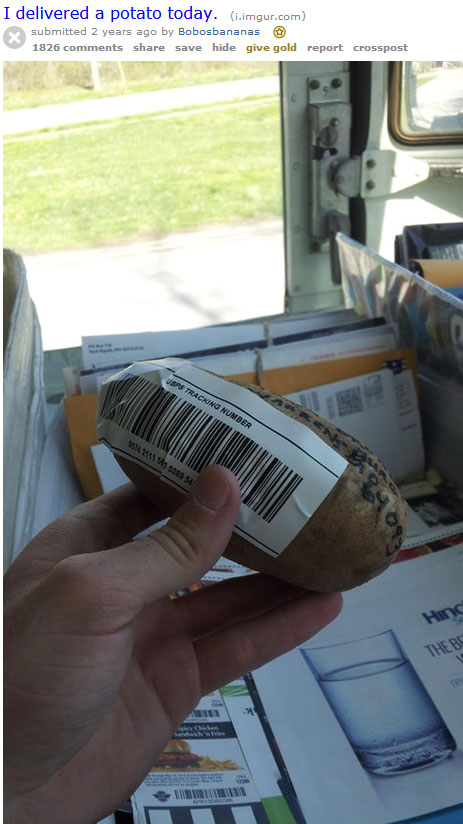 To most people reading the post, it was an eye opener. Most people didn’t know you could write an address on a potato and get it shipped.

They asked the mailman what else they were allowed to ship, and that post quickly became one of the most engaging Reddit posts that month.

Some asked if they could ship vegetables:

Thanks to the superb engagement, it was on Reddit’s main page, and that’s where Alex found it.

To most Redditors, it was cool. To Alex, it was an opportunity.

He decided to set up a website that let people send anonymous custom messages to whoever they want on a potato.

That evening, Alex was supposed to go on a date with his girlfriend. He cancelled it (don’t ask me what she thought of him) to build a website where people could pay him to anonymously mail a potato with a short message written on it. No envelope necessary. 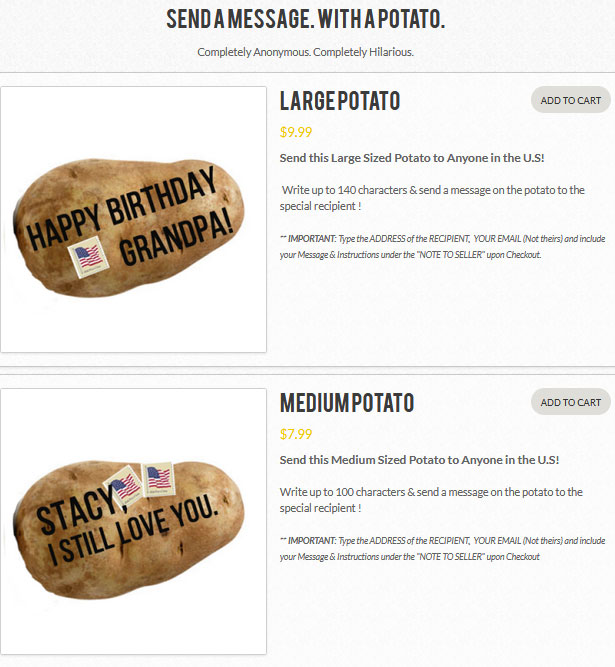 But it was good enough to do the job, and that was all that mattered.

He decided speed was more important than deco, because Alex knew it was going to be big. Besides, he could tweak the site later.

Alex launched the site on Reddit the next day. In just two days, it generated over $2,000 in revenue. And that was just the beginning.

Thanks to Reddit, Alex’s site quickly went viral. As we all know, people love to share things on social media. Many of those who received potatoes sent by their friends decided to spread the word online.

I mean, come on, it’s hard for you not to tweet or post about it if you received a potato one day. Here are some of them in the early days of Potato Parcel.

My sister's big promotion at work earned her this #potatoparcel pic.twitter.com/swti2WdxzZ

#potatoparcel thanks for making my day, whoever you are that sent this!! pic.twitter.com/WTiH7W9e5E

My romantic gestures are as bad as my compliments. #PotatoParcel pic.twitter.com/ofUPMKSxwy

Boom, that was the first wave.

And the craze kept on spreading when those that received potatoes decided to send some too.

From Reddit, social media took over. It soon grabbed the attention of USAToday. They hooked up with Alex, and ended up reporting about his weird business idea:

Right after that report went live, Potato Parcel shot through the roof.

It soon appeared in Good Morning America, CNBC, The Chive, and Playboy. It was broadcasted across US television and radio stations.

These are some of the more popular media mentions:

If you take a look at the traffic stat screenshot below, you will notice there are very obvious traffic spikes on the site every month. That’s caused by a media mention going live.

Obviously, sales came with the traffic.

Here is the monthly breakdown of Potato Parcel’s revenue and profit: 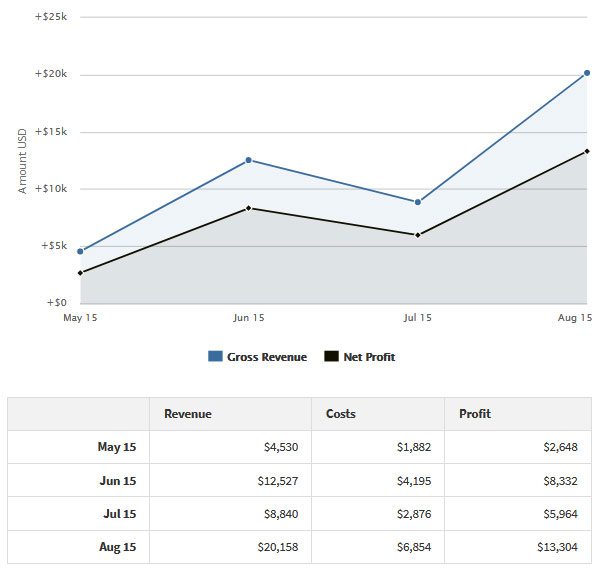 The numbers are super awesome considering that the sales came in without Alex having to spend a single dime on advertising. It was free traffic.

Here what’s interesting. If you look at Alex’s revenue/profit ratio, you will notice he made around 65% out of each potato shipped. That’s super lucrative profit margin. Heck, if this isn’t ridiculously high, I don’t know what is.

Another great thing about shipping potatoes is that Alex doesn’t need to keep any in stock. They’re everywhere, and that means no inventory headache. Alex purchased all of the potatoes from his local Wal-Mart.

Quick growth, high profit margin, low operational expenses, plus using Wal-Mart as his storehouse, it’s the hallmark of a great business all put into one, thanks to a smart idea Alex borrowed from a Reddit post.

According to Alex, he was shipping around 100 potatoes a day at the peak of his business. That’s 30,000 potatoes a month!

He was busy with his full-time job and couldn’t keep up with it. So, he hired his roommate’s girlfriend to help out with the daily operations.

He even planned to take the business overseas as he noticed some English speaking visitors from outside the US. There was certainly business to be made there.

He got an email from Flippa – a popular marketplace for buying and selling websites.

Flippa reps approached Alex to see if he was willing to sell Potato Parcel.

Here is one thing many people don’t know about Flippa. They think it’s just a marketplace where people list their websites for sale, but that’s just part of the story.

Flippa also has a special team actively on the lookout for interesting sites that have gotten lots of buzz. They then ask the site owners if they’re willing to sell.

When Flippa approached Alex, they caught him off guard. Before this, he hadn’t even considered such a prospect. How could he, when the site was killing it?

But after exchanging some correspondence with Flippa, and a lot of consideration; he changed his mind.

Here’s a few reasons Alex decided to sell Potato Parcel in the end, and they do make a lot of sense.

#1. Growth started to slow down.

Though sales were still coming in, but at closer inspection, he noticed that after 4 months of crazy growth it was losing momentum – especially during late August.

The momentum brought by media mentions was fading. Unless Alex could come up with new marketing ideas for exposure, he wasn’t going to enjoy the avalanche of orders for long. With that, it really made sense for him to get out of the game with a profit.

One challenge for Alex was that he depended on Reddit too much. Without media mentions, 35% of all traffic came from Reddit. It was risky because Reddit has been known to take down posts without warning. As they say, don’t put all your eggs in one basket. This made Alex think hard.

#3. He couldn’t expand fast enough to take advantage of the overseas market.

When Alex looked at his Analytics, he realized 15% of his traffic came from 4 other countries. It wasn’t going to be cost effective for him to ship potatoes overseas using international airmail; the shipping would cost more than the potato itself.

To facilitate the delivery, he had to find someone in each country to take care of the shipping. And that was a ton of work. Remember, he still had a full-time job.

#4. He was there for the money, not for the business

Selling potatoes wasn’t really part of his life, the opportunity just happened to pop up in front of him while he was there and that’s it.

As Alex put it: “I don’t see potatoes being my career.”

“There is no five-year plan. The real plan is how long I can keep it going with me working full-time and doing this on the side. I’m just focused on trying to make as much money as possible while working on my career.”

Getting a business go viral and making some quick cash is one thing. Growing it into a sustainable business for the next 5 or 10 years needs a lot of passion and commitment. If he wasn’t going to be there for the long haul, it made a lot of sense to leave the business.

Here is his Flippa auction in action: 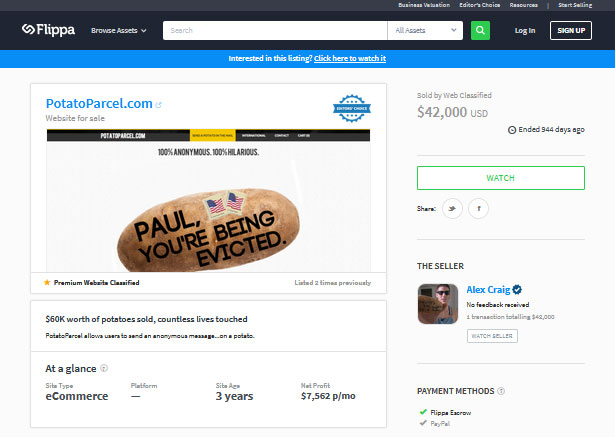 You don’t need original ideas to be successful

Alex’s story is a perfect example of this.

He wasn’t the only person who saw the Reddit post, but he was the one who acted. If he didn’t make the idea a reality, it would have been just one out of the millions and millions of ideas that never got beyond the pipe dream stage.

Ideas are useless without the skill and effort to execute them. People come up with great ideas all the time, but if they don’t do anything with them, they don’t generate any worth.

Who knows, you might just get yourself a five-digit profit from that simple idea.

I hope you’ve gotten value out of this post.

If you enjoyed it, please let me know in the comments below.

10 thoughts on “How Alex Craig Landed $72,000 in 4 Months Selling Potatoes on the Internet”