His startup was running out of cash, and he had to get a ton of users real quick to hang on.

He didn’t have the cash to buy traffic.

Blogging is also out; it’d take months to get traffic this way.

He had no gurus, no consultants, no friends—no one at all—to point him in the right direction.

99% of startups will crash given the same situation.

But Mikael didn’t. He made things work.

He didn’t just save his startup; he also accumulated 1 billion website views on it without relying on those “conventional” traffic strategies like PPC and SEO.

Using a side project he created by mistake.

In today’s post, I want to show you exactly what Mikael did to save his startup – Crew.co 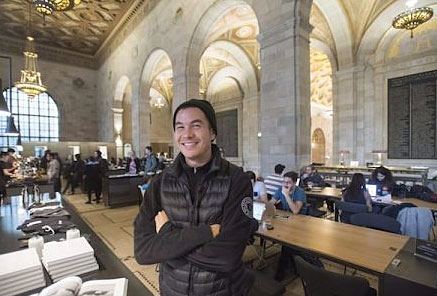 Mikael Cho was the co-founder and CEO of Crew.co, a marketplace that allowed anyone to find designers for their website projects.

Here is what happened back in 2015 to Mikael and his partners.

Their startup, Crew.co turned 2 years old. It also looked as though it would be their last year.

And it wasn’t even the first time things looked dire.

From the day their startup was born, they had made 3 major changes to their business model, and their company almost died. Twice.

They ran out of cash.

They had 3 months worth of cash left to turn things around.

Failing would mean game over. That meant they needed to find users real fast.

Their options were limited:

#1. They had no money, so customer acquisition through online ads was out of question.

#2. Blogging work, but it takes time to see results this way.

#3. Build something useful to generate word-of-mouth—no guarantee for this one.

Be that as it may, they needed to find a way to accelerate “normal” growth if they were going to stand a chance.

Around this time, they were revamping their site’s homepage.

While searching for a photo to use, they noticed every photograph available either sucked or cost too much.

They ended up hiring a photographer to take the photos they wanted.

At the end, they only used one photo; there were extras.

Mikael thought a whole bunch of people out there probably shared their pain in finding high-quality photos. Since he didn’t need the leftover pics, he decided to give it away for free.

You never know what’ll happen before you try it.

So Mikael went ahead and tried his luck.

All the site had was 10 photos and a link back to Crew.co – their startup.

The early version of Unsplash looks way simpler than what it is today. 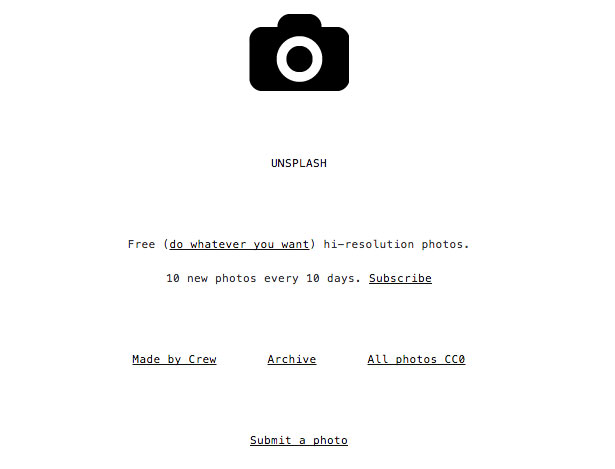 Getting the news out

I’ve discussed Hacker News a couple of times on Growthtext.

The largest crowd there? People in the tech industry as well as startup companies.

Anyone can submit their website to Hacker News. If you appeal to these people, Hacker News is a great place to spread your story and get visitors.

The front page of Hacker News is the Holy Grail for everyone in our space. It brings you traffic, sales, brand awareness and more—all of which can make a huge impact on your business.

To learn how to get to the first page of Hacker News, check out this post on Growthtext.

When Mikael submitted Unsplash to Hacker News, he wasn’t expecting much, maybe a few hundred visitors at most.

What happened took him by shock.

In less than 24 hours the photographer wrote this to him:

“Dude, happy you enjoyed the photos! I don’t know what you did with them but there’s a ton of people on my portfolio site right now!”

Mikael went back to HackerNews and saw Unsplash was featured at the top of the site!

Here is his Hacker News link/thread in action:

Here is the link.

The monthly traffic of Hacker News hovers between 10 -15 million visits per month. Being #1 on its front page only means one thing to Mikael: people flooded to Unsplash.

When people saw it on Hacker News, some of them took to social media such as Facebook and Twitter. News continued to spread like wildfire. The crowd was going crazy.

And you know what?

Everything happened within the first 24 hours!

Here’s a shot of the tweets that came through in the first day Unsplash was on Hacker News’ first page: 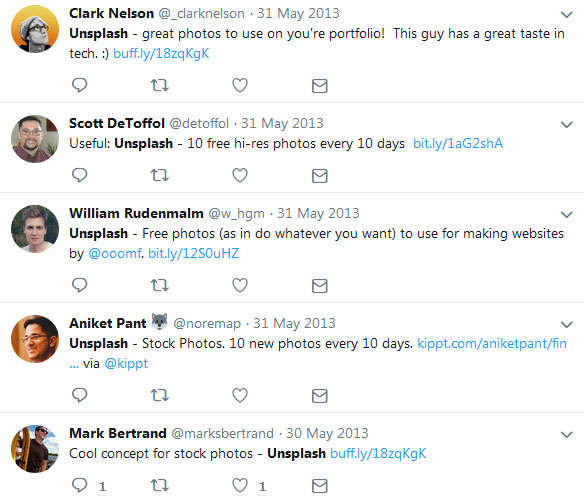 Thousands of photos were downloaded on the first day.

Even more surprisingly, other photographers began submitting their own photos to Unsplash (it was designed to allow anyone to upload photos to the site from the start). That made their photo inventory grow passively without Mikael and his team having to do anything.

They also saw a gigantic jump in traffic to Crew.co as they had a link setup on the Unsplash header menu to link back to Crew.

A large number of Unsplash users then signed up to join Crew. There were so many of them; they dwarfed each and every ad campaign Mikael had ever run to promote Crew.co

According to Mikael, there were more people paying attention to Crew.co within the first 24 hours than in the entire 2015. All thanks to the 10 free high quality photos he gave away for free.

From that day on, they suddenly realized they had accidentally solved a real pain in their industry. That of finding free, high-quality photos.

Fast forward a year, and Unsplash became the main source of traffic and revenue for the parent company Crew.co.

According to Mikael, it peaked at around 60% of Crew.co monthly revenue due to customers finding Crew through a simple ‘Made by Crew’ link on Unsplash.

Today, Unsplash is now one of the top photo sites available online.

Mikael and his partners eventually decided they want to focus on growing the site they founded accidentally.

They eventually sold Crew.co to Dribbble and started working full time on Unsplash, so it’s now their main and ONLY project.

It’s grown a lot since those early days, with more than 20 million photo downloads every month, half a million free-to-use photos, and integrated into thousands of applications including Trello, Adobe, and more.

Here is the key takeaway:

Unsplash was a side-project for Mikael’s startup in crisis, Crew.co.

Asa creator, he knew that finding beautiful, useable imagery was one of the hardest challenges in any creative project, so he decided to give away his extra photos for free, to be used by anyone for anything.

He setup a $19 tumblr theme, a domain, and posted the site to Hacker News.

What happened next was never short of amazing.

If you need attention, here’s what you should learn from Mikael’s story, before thinking of making money or getting attention- create value first.

Create value for others by creating something awesome to give away— a value that is related to your core business.

Chances are, if they like what you put out there, some of them might want to know more about your core business.

What are you selling?

Instead of focusing on selling, study your perfect audience. Think about what values you can give away first.

The more value you can give away, the more will come back to you.

Yes, that’s how to get the word out and gain attention in today’s world.

If you think you’ve learned something important, I’d love to hear it.

Leave a comment below if you’ve any thoughts, and don’t forget to spread the word!

How Alex Craig Landed $72,000 in 4 Months Selling Potatoes on the Internet
How Ed Clay Started His Cleaning Company While Working On His 9-5 and Grew It Into a 2.6 Million Annual Revenue Cash Pumping Machine