The accepted truth is that, to make money on YouTube, you need to produce:

#3. And that’s not enough… you need to produce a ton of videos – that means you’ll probably need a production team to pump them out at scale.

The reality is: No, you don’t need all of those to make it big on YouTube.

What you’ll need is just 1 thing:

Your passion & authenticity (and of course, a video recorder to document things)

Do what you’re really passionate about, document your process and show it to the world – that’s the key to making money on YouTube.

Follow this and you’ll be successful… especially if you are starting out as a nobody.

On this post, I’m going to show you how 1 lawn mower contractor turned fulltime YouTuber who makes a lot of money just by documenting himself making primitive huts and tools from scratch using natural materials in the wild.

…and best part is, he wasn’t making a lot of videos.

At the time I am writing this, all he has on his channels is just 29 videos and he is already sitting at an astonishing 5.4 million subscribers. 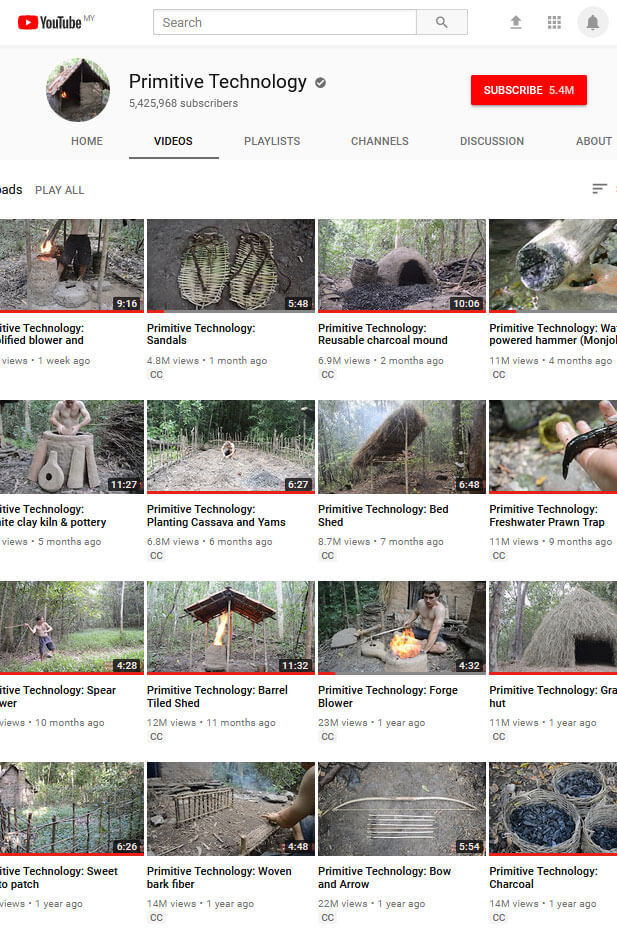 Here is the link to the Primitive Technology YouTube channel.

This YouTuber is very different. He never talks in his videos … heck, he doesn’t even tell you his name.

In the comment sections of his videos, he shares a bit of his background with his audience.

He tells his audience he has always loved to see how people built and made things in ancient times.

He decided to try and see if he could replicate what our human ancestors did- building everything with bare hands using natural resources from his surroundings.

He applies what he learns from the Internet and bush craft book research. Then, it’s just trial and error.

He builds everything in a woodland, somewhere in Northern Queensland, Australia.

He does this all by himself, 1 man, no team.

His tool to record his projects? A Nikon D3200 and a standard tripod.

Here is one of his most popular videos where he uses mud + other natural resources from the woods to build a hut. The video has received more than 30 million views since the day it was uploaded to YouTube:

Below is another popular video on the channel. It’s been watched by more than 10 million viewers. In the video, he shows how a water powered hammer was made.

This is the first “machine” built in the series using primitive technology that produces work without human effort:

Unlike most of the videos put forward on YouTube, his videos don’t try hard to pull you in, they don’t demand your attention.

He just documents his work; no talking; no explaining, no theories- just plain documentary.

Every video is edited, trimming down the un-necessary parts and captions are added to explain what he does and why he does things.

When asked why he doesn’t speak in his videos, here is his answer:

When I watch how-to videos, I fast forward past the talking part to see the action part. So I leave it out of my videos in favor of pure demonstration.

With each new video he’s uploaded to YouTube, this word-less YouTube star is gaining millions of views.

So how much money does he make doing this?

We can clearly see ads showing up on the videos. So, obviously he is monetizing his videos.

Our shirtless and silent YouTube star doesn’t share how much he makes from ads, but we can definitely make an educated guess.

Once a YouTuber links AdSense to his Channel, he makes 55% of the ad revenue.

YouTube provides the platform, the audience, the servers and other resources that are needed to support content producers. Their 45% covers the cost that goes with those to ensure they are in business and making profits.

When a viewer watches 30 seconds or more of an ad pop up, a YouTuber is typically paid around $0.18 per view.

Generally, only about 15% of viewers will be counted as a “paid view” since many of them skip the ads.

Now that we know that a YouTuber is generally paid $14.85 for each 1,000 views, we just need to find out how many views the Primitive Technology channel gets each month, then we will be able to estimate its monthly ad revenue.

To figure out a channel’s monthly video views, we’ll use Social Blade’s stats.

As of this writing, Social Blade estimates the Primitive Technology channel in the past 30 days has 27 million views.

Knowing that, here is the estimated revenue of the Primitive Technology revenue in the past 30 days:

Get paid $5 million a year documenting what you love doing; if this is not the best “make money on YouTube” model, I don’t know what is 😉

In fact, the big money for YouTubers is not in the ads.

For example, the Unbox Therapy channel doesn’t show any ads in their videos – its revenue is totally made by sponsored videos and whatever business arrangements made between the channel and companies willing to have their products displayed on the show.

Famous YouTubers launch beauty product brands, games (PewDiePie’s Legend of the Brofist on Steam) and many other businesses.

Our silent YouTuber recently revealed he might have his own TV show!

He is now considering a TV show invitation.

If that works out for him, who knows, it might make him more famous than Bear Grylls in his Man vs Wild series and earn him much more than what he is making now. 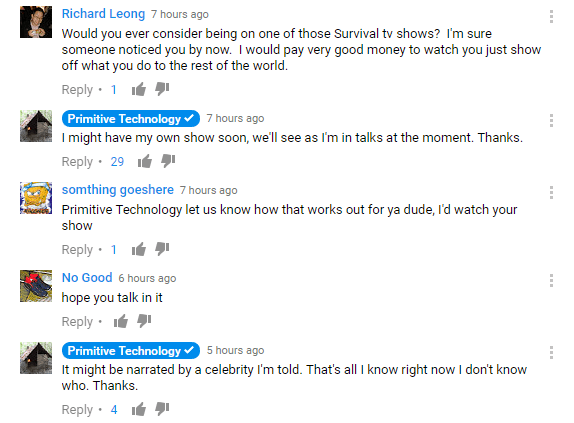 Take away on how to make it on YouTube

Here is the take away.

Use your own passion and authenticity to create videos.

As you have seen in the Primitive Technology case study, you don’t even have to speak if you don’t want to; what matters is how much passion and personality you put into the videos.

That makes the difference.

There is ZERO excuse for not creating content around your passion, your hobby or the things you do best.

If you don’t have something to say, document; just like our wordless star does 😉

If you enjoyed this post, please let me know in the comments below.

How to Generate $1200 Monthly Recurring Revenue In 2 Days by Getting on Hacker News Front Page
Fastest Exit Attempt Ever: How to Sell a 24-Hour-Old Website for $85,000