How to sell a website for lots of money?

#3. Add a host of other traffic getting efforts to make it profitable

That’s the “conventional” way of flipping a website for profit.

In today’s post, I want to show you an “unconventional” exit strategy by a 25-year old Australian entrepreneur Matthew Carpenter.

It’s by far the fastest website exit attempt I have seen.

Want to see how Mat did it?

A wicked business idea was born

Mat had this wicked business idea: where people could wreak revenge, anonymously, on the people they hate.

For just $9.99 people could go to a website and purchase a glitter-filled envelope that would be sent to people they hate or wanted to have fun with.

The envelope would have a letter inside that told the receiver that they sucked, and upon opening glitter would fall out and make a huge mess.

Towards the end of 2014 Mat was contemplating his idea.

Mat had this idea for a while…

But could this ridiculous idea work?

Did anyone really want to pay someone to do what seemed like a stupid proposal?

Pay someone to send an envelope full of glitter?

Mat was afraid he would be wasting time on this crazy idea he had.

“Screw it, I’m going straight in. What’s the worst thing that could happen?… could be just wasted a couple of days in my life building the site and launching it”

So he set up to experiment with his crazy idea…

On December 2014, he registered the domain name: shipyourenemiesglitter.com

Within 48 hours, Mat had a lightweight site setup.

The site was built with Bootstrap.

It gives you files, such as HTML, Javascript and CSS, that you can use as a starting point to modify for your own site.

Unlike WordPress, Bootstrap requires some knowledge of computer coding to build a site.

With his IT background, setting up the light weight site wasn’t hard for Mat.

In less than a week, the site was live.

The early version of the website looked way simpler than what the site is today. 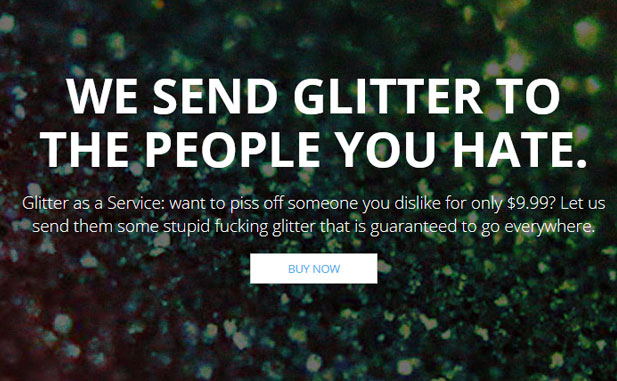 How did Mat promote the site?

#2. Emailed 2 journalists about how his envelopes filled with glitter will shake planet earth 😉

In most cases, #1 and #2 won’t make a big impact on a website launch unless it’s from popular movie stars and celebrities; Mat isn’t one.

You can say that the first two action items didn’t play much on the launch.

If you are totally new to Reddit and don’t know how the site works, let’s cover some basics; check out my other blog post here on Reddit basics.

He then headed over to his email inbox and saw a couple of payment notifications from PayPal.

Looks like a good start. According to Mat, he thought that was about as big as it was going to get…

20 minutes later, he checked Reddit and his email inbox again.

The upvotes had exceeded 100 and orders were in double digits!

An hour later, the orders were in triple digits. The signal was strong. It was going to take off big!

The less than awesome part?

The sales came in too much, too soon. Mat was caught completely unprepared.

He didn’t have a single envelope, and didn’t know where to get his glitter in bulk.

The Reddit votes quickly surpassed 1000 in the next few hours. At the same time, he received an email notification that Product Hunt accepted his submission and it went live there. 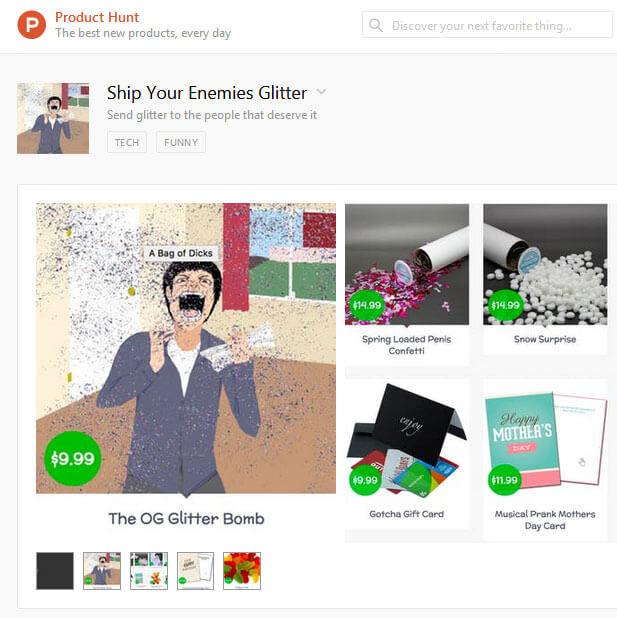 According to Mat, shipyourenemiesglitter.com is now among the top 10 submissions of all time on Product Hunt with 1300+ upvotes.

Mat’s offer to ship one’s enemy an envelope of glitter that would spill out on to the unsuspecting recipient resonated with so many Product Hunt members.

The combined exposure from Reddit and Product Hunts caused Mat’s site to crash for a short while.

He took to Product Hunt to plead with people to stop paying for his service: 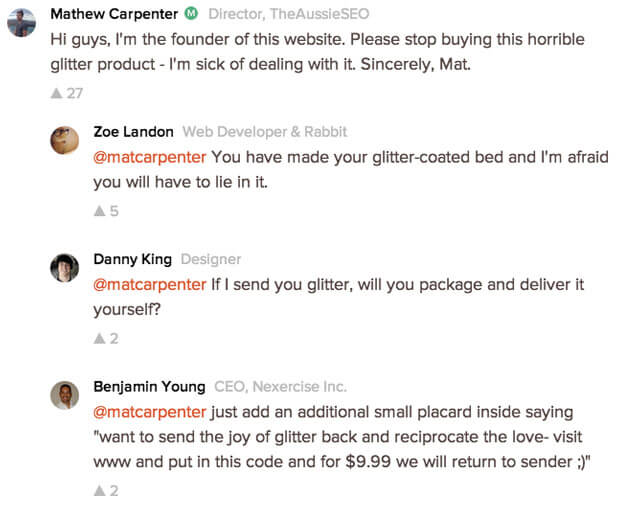 As Reddit is so many times bigger than Product Hunt, Mat got even more exposure there.

Now that the dust has been settled, while writing this I did a search on Reddit and saw Mat’s Reddit submissions sits at 9000+ upvotes. 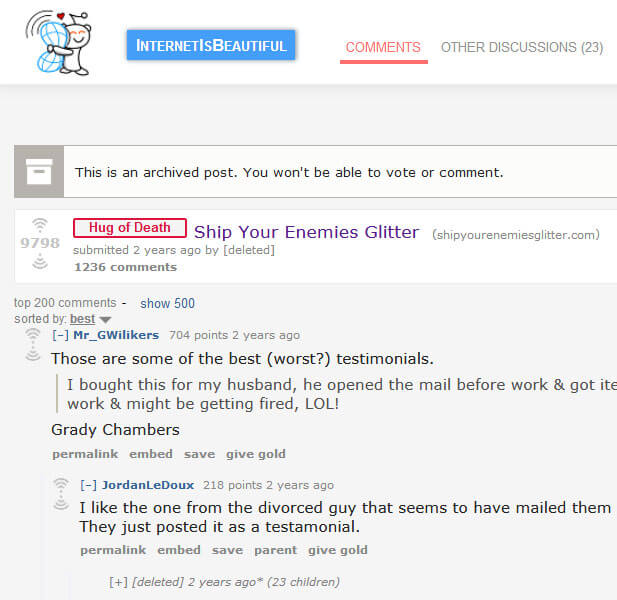 After people found his site on Reddit and Product Hunt they started sharing it on the social media.

According to Mat, within the first 24 hours, he had a total of 270,000 social shares- the first day the site was launched.

The press emails also started coming in. Mat even had an interview with ABC over the phone before sunset on day 1.

By now, the story of Mat and his new website was everywhere.

Press requests kept coming in and the sales kept growing.

When he opened his PayPal account in the evening, he saw $20,000 sitting there:

The orders were up to 2,300 in the first day and there was no sign of slowing down.

With the 2300 orders sitting in his PayPal, it was going to take him a while to have them all shipped out.

He had his doubts if he was able to handle the orders at the rate it was growing… as he was the only one running this whole thing.

Things grew too much, too quick…

Mat decided to give himself a break.

He needed to think this over if this was something he was able to support.

He had to make a decision fast if he wanted to continue doing this or let someone who already had the infrastructure in place to run the business.

Looking it back, that was the right decision.

Mat had no employees, processing the backlog orders all by himself already took forever.

If this was just the backlog, what would happen if he re-opened the order form on his website? It was impossible for him to fulfill the orders.

Hiring was not an option as time was not on his side.

Plus, he wasn’t even sure how long the interest on this is going to last.

When a viral site like this gains traction, traffic goes through the roof. When the interest dies off, the traffic could do the same just as quickly.

He decided to sell his site. 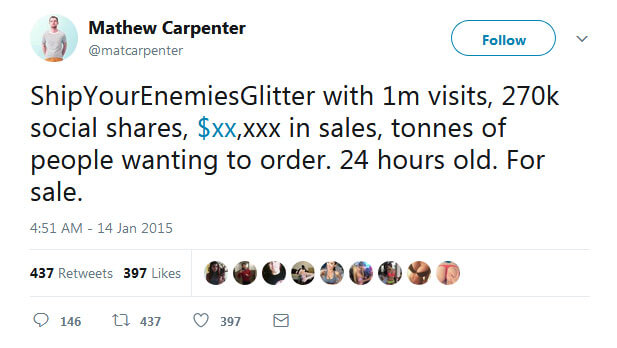 The tweet caught the attention of the press that had already been reporting the site for the past 24 hours.

They started reporting the sales offer. That got him a lot of private offers via email to buy his site.

He was looking for a higher offer.

The following day, he got an email from Joseph Carroll, Flippa’s website director, to ask if Mat wanted to list his website for sale on Flippa.

Joseph told him some of their users were asking if they could get Mat to sell his site on Flippa which made Joseph take the action to contact Mat.

In case you haven’t heard about Flippa, it’s a popular marketplace for buying and selling websites, domain names and mobile apps.

After discussing with Joseph how he could help Mat with the auction, Mat listed his site for sale on Flippa.

The auction was listed for a 7-day auction, with the starting price of $1.

He admitted he had no idea at what price the site could sell for, he was just trying to get off the site with a bunch of cash as quickly as possible… and at the highest price.

At the last hour of the action, the bid was at $70,600… and then Joseph suggested that Mat add a “buy it now” button to the auction page.

The idea of a “buy it now” button is that people can snap up the site for a set price without having to bid with the others while waiting for the auction to end.

The BIN price was set at $85,000 and was sold 3 minutes before the auction was ended. 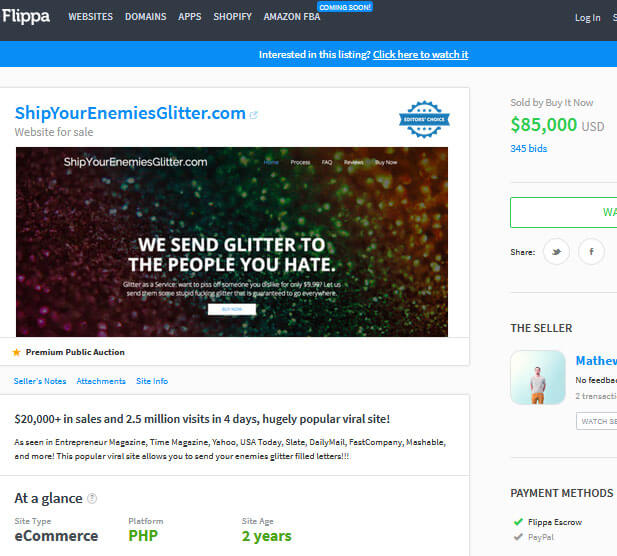 It looked like the buyer didn’t want to wait for an extra 3 minutes and risk losing the site to another bidder.

They just hit the BIN button to pay for the extra $15,000 to secure the site.

At last, the site was sold.

9 days later, Mat didn’t own the site anymore. It was transferred to the new owner.

What’s left was for him to send out the 23,000 orders he had received.

According to Mat, he had to order 7 kg of glitter to fill up the orders.

After endless hours of filling up the envelopes with glitter plus taping the edges of the envelopes so that the glitter wouldn’t spill out during delivery, plus a few trips to the post office, his work was complete.

Not sure if he had some angry emails shouting at his late delivery, though it probably wouldn’t have posed much of a problem as the orders were placed to the sender’s enemies.

So, there it is, the story of the fastest web business exit attempt I have ever come across.

A good idea promoted in the right places produced a never seen before success.

That’s the miracle of today’s all connected world.

Now that you have seen what’s possible with just one good idea, it’s time to take your own good idea and smash things up!

If you enjoyed this post, please let me know in the comments below.

1 Man + 29 Hobby Videos = $5 Million Annual Profit. Here is the Best "Make Money on YouTube" Model You Can Apply
How I Made $12,000 in 10 Days Launching an Online Course to My Blog Readers